For the first time since the 2004 original pressing, Keane’s debut album Hopes And Fears will be reissued on vinyl. The album was hugely successful and sold over 5 million copies worldwide, but only 5000 were pressed on vinyl. As such, original mint vinyl pressings of Hopes And Fears are hard to come by, and sell for over $300.00 on Discogs.

The good news for those wanting a copy of this great album on vinyl: on 4 August 2017, the vinyl reissue will be released.

Amazon UK has the pre-order page up already:

As does Amazon US:

Kanye West’s 2013 studio album Yeezus debuted at No. 1 on the Billboard 200 and topped the charts in 30 other countries as well. It was praised by critics, some calling it some of Kanye’s greatest ever work. So it comes as a surprise that Yeezus never saw an official vinyl release

Prior to Yeezus, every Kanye album except Graduation had seen a vinyl release. The College Dropout, Late Registration, 808s & Heartbreak and My Beautiful Dark Twisted Fantasy are all readily available on vinyl.

MBDTF came in a beautiful vinyl package with 3 vinyl records, 5 inserts and a poster.

There were a few reasons why Yeezus never saw an official vinyl release.

Legendary producer Rick Rubin told Rolling Stone that he was called into the studio to work with West on Yeezus with just five weeks to go before the release date. When Rubin first heard the rough cut of Yeezus, it had a playing time of nearly three and a half hours. He said that West wanted the album to have 16 tracks. After a lot of work, the album was cut to 10 tracks. This late-stage rushing likely caused uncertainty at the record label as to whether the album would even be completed on time and no vinyl release was planned at the time of the album’s release.

I was thinking about not making CDs ever again… Only streaming

Although he only mentions CDs and not vinyl, it seems from his move towards streaming services that Kanye is abandoning physical music releases and sales entirely.

What could have been

In 2016, LuckyMe, a UK-based record label posted pictures of a design they made for a release of Yeezus on vinyl. According to the label, they were asked to investigate the possible release of a Yeezus vinyl record shortly after the album dropped. Unfortunately, the album never dropped. But the picture they posted was a reminder of how nice an official Yeezus vinyl pressing could have been.

Where to get Yeezus on vinyl

Despite there being no official pressing of Yeezus on vinyl, several unofficial, bootleg pressings exist. There are quite a few Yeezus vinyl listings on eBay. They are unofficial, and Kanye receives no money from their sales. However, if you want Kanye West’s entire discography on vinyl, they’re the only possible way to go.

Plus, they come on a whole bunch of pretty colors:

In fact, the Discogs page for Yeezus lists 9 different variants of the vinyl bootleg. On purple, red, orange and clear vinyl.

Apparently, they look and sound amazing, but nothing will ever be more pleasing than an official vinyl release of this amazing album.

If you’ve ever tried buying records online from overseas, you may notice that shipping is often prohibitively expensive. I’ve compiled a list of record stores with cheap international shipping on vinyl records. Allowing you to buy vinyl from the UK or the USA without it costing you an arm and a leg.

ImportCDs offers international shipping to most countries for $5 per record. It’s a good deal if you’re buying one specific deal from them but it can quickly add up if you buy multiple records. They have a huge range of vinyl records and CDs and often have 10% – 20% off sales.

Warner Music Store has a fixed shipping cost for all international orders and charges $9.99 to ship as many records as you want, as far away as you live.

Juno Records is another UK based store. They charge just £3.60 per record sent via the Royal Mail’s First-Class Airmail. Not bad.

Dusty Groove is a Chicago based record store that sells both used a new records. Records ship to most countries for about $9.00 + $4.00 per additional record.

If your country isn’t covered by International Economy Plus, you’ll have to pay $50 to ship one record.

MaxVinyl is a UK based store specializing in used records. They ship vinyl internationally for a very reasonable £12.00 per delivery + £3.00 per additional record.

Napalm Records is a European record store specializing in rock and metal music. It has decent international shipping costs if you’re buying lots of records.

Bananas Music is a US based  online record store that airmails up to 4 LPs to most countries for $18.00.

I haven’t tried any of the above record stores (except Amazon UK, which was very good) but after testing their checkout systems with a bunch of exotic countries it seems that these are the best places to buy vinyl with the lowest international shipping prices for vinyl records.

I’ll keep updating this post to add stores with cheap vinyl record shipping as I find them.

Do you know any record stores with competitive international shipping rates? Link to them in the comments below.

A lot of people complain about records skipping on their brand new Crosley Cruiser turntable. Often, Crosley owners think there is a problem with one of their records rather than the turntable because only certain records will skip. Unfortunately, the more records they play, the more they’ll see skipping, especially in louder passages of music. This is a flaw with all toy and low-end turntables that can not be fixed and will cause damage to the skipping records. I’m going to explain why records skip on Crosleys and other cheap turntables.

Built-in speakers may seem like a plus. It keeps the system portable and they look cute on the little briefcase, but unfortunately, built in speakers are completely incompatible with the concept of phonograph records.

Vinyl records work because of vibrations. When records are made, a vibrating cutting blade known as a lathe cutter is connected to a source playing the music that is set to go onto the record. This cuts a groove in the first record in the shape of the music. That original is then metal coated and used to stamp out the vinyl records you buy. When the record is played back, the needle, known as a stylus, glides along the groove in the same path that the lathe blade cut it when the original music recording was connected to it. The stylus vibrates along that groove and those vibrations get converted into an electronic signal by your cartridge, which is amplified by your receiver and transformed back into music by your speakers, which vibrate the air to make the sounds that you hear.

As you can see, playing vinyl records relies heavily on vibrations. The stylus will pick up every vibration, especially the vibration from built-in speakers. Speakers should never be on the same surface of your turntable, let alone in your turntable. Often, the vibration caused by speakers is enough to knock the stylus out of the groove, causing skipping and damaging the record at the place where the stylus lands on the record again.

This causes skipping on Crosley, GPO, ION and other cheap turntables with built in speakers.

See: Cheap turntables that will ruin your records

Records are thin, wobbly pieces of PVC plastic. They need to be supported while they are being played. This is not what is happening on a cheap turntable. Crosleys, IONs and the rest of the toy turntables on sale have a platter that is way too small for the record. This allows the outer edge of the record to bend and flex as it spins, throwing the stylus and tonearm off the record, causing skipping and damage to the record.

Vinyl LP albums, the big 12″ ones, were meant to be played at 33 1/3 rpm. Proper turntables have been specifically built to play at that speed. Crosleys and the rest of these turntables have a cheap motor set to 33 rpm and connected to the cheap platter with an elastic band. The end result is horribly inconsistent speed. You may hear this as the record sound too high and/or too low pitched. The constant slowing down and speeding up of the platter and the record will throw the stylus off the record like a car full of unfastened goods being thrown around when the breaks are hit.

The solution to vinyl records skipping is to get a new, decent turntable. One that has a counterweight, anti-skate, an appropriately-sized platter, a decent motor and no built-in speakers.

When looking for turntables, there are a few things you need to look for on the turntable you need to make sure it won’t destroy your vinyl. While there are many features that make up a great turntable (pitch control, strobe lights, etc. are nice but not essential), most audiophiles consider these the minimum features that every turntable should have.

(See: why turntables without these features will ruin your vinyl)

If you’re buying a turntable on a strict budget we strongly suggest buying one of the turntables listed below. You’ll spend slightly more now but you’ll save a lot in the long-run by buying a turntable that won’t break down or damage your records.

So we decided to compile a list of the cheapest turntables that meet these basic specs:

The only Crosley you should consider buying. The Crosley C100 is Crosley’s first premium turntable. It comes with a full-sized platter, a magnetic Audio-Technica cartridge and pitch adjustment features. It has a built-in phono stage so it will plug into any stereo or home entertainment with red and white phono inputs. 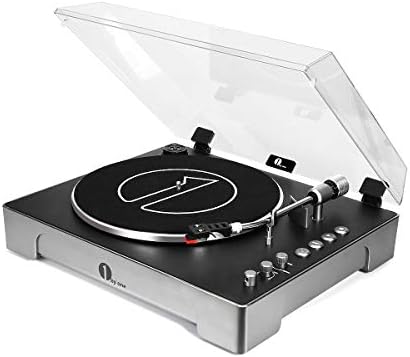 This is the ONLY 1byone turntable you should consider purchasing. This record player has a full sized platter and adjustable counterweight. It also has a built in preamp so it will work with any home entertainment system amplifier with a red and white aux input. It’s fully automatic as well which means the player automatically lowers the arm onto the record which is great for new record collectors. A highly recommended product and the perfect gift for somebody who has been looking into starting a vinyl record collection.

3. The House of Marley Stir It Up Turntable

Perfect for beginners, this turntable features all the basic requirements that turntables should meet. It features a working counterweight, anti-skate, full-size platter and an Audio-Technica AT3600 Moving Magnet cartridge. Another feature that this turntable has is a built-in phono preamp. Built in phono preamps allow you to plug this into any sound system that can take a normal aux cable or RCA cables. Turntables without built-in preamps need a vintage receiver with a dedicated phono preamp to amplify the low level signal produced by moving magnet cartridges to a level that all sound systems can amplify. You could plug this straight into your home sound system, some powered PC speakers or even straight into your headphones thanks to the turntable’s built-in headphone jack.

Pro-Jects lowest priced offering also has everything you need, except for a phono preamp. If your receiver has a dedicated phono input, you’re good to go. If not, you’ll have to buy one before you can plug your turntable into your sound system.

I’ve listed this Pro-Ject because it’s the cheapest one on offer but they’re all great really. Get one that fits your budget and catches your eye.

This one comes with a built-in phono preamp. It comes equipped with an Audio-Technica AT95e Moving Magnet cartridge.